Throughout his 36-year career, DeMuro has directed the transformation of complex global organizations responsible for fulfilling critical and challenging missions worldwide in the national security, technology, and aerospace industry.

DeMuro joined General Dynamics when GTE Government Systems was acquired in 1999. Prior to the acquisition, DeMuro spent 13 years with GTE in a number of senior leadership roles. Earlier in his career, he spent nearly a decade as an acquisition official at the U.S. Department of Defense.

DeMuro has been actively involved with a number of associations and nonprofit organizations, including the Association of the United States Army, the MILCOM Conference Board, and AFCEA International, where he served on the board of directors as an Executive Committee member and as chair of the Audit Committee. He has also served on the boards of the National Science Center and the Boys and Girls Club of Taunton, Massachusetts.

A native of Philadelphia, DeMuro earned a bachelor’s degree from the University of Pittsburgh in 1977 and an MBA from Fairleigh Dickinson University in 1986. 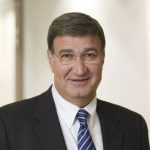